There are three main types of batteries used in uninterruptible power supplies: Nickel-Cadmium, Lead-Acid, and Lithium-Ion. There isn’t a single “best” UPS battery technology – the choice should be made on a case-by-case basis.

Lead-Acid batteries have a proven track record for reliability when used in an uninterruptible power supply system. In large power applications, where weight isn’t the overriding concern, they provide the most economical choice.

This cost-effectiveness is combined with other performance qualities such as low internal impedance and high tolerance.

Also known as Sealed Lead-Acid (SLA), this is the most common type found in modern UPS systems. They typically come with a 5 or 10-year design life and are best stored in a dry, climate-controlled room at a temperature of 20-25°C.

VRLA batteries are sealed inside a case which has a valve that vents to release gas if internal pressure gets too much, hence the term “valve regulated”.

Because they are sealed, they can be mounted either vertically or horizontally, so are suitable for use within battery compartments, rackmount trays or external cabinets. In addition, they don’t need any direct maintenance such as being regularly topped up with water.

There are two main types of electrolyte composition used in a VRLA UPS battery: Absorbed Glass Mat (AGM), where the electrolyte is held in a porous microfiber glass separator; and Gel, which is made from a mix of sulphuric acid and silica.

AGM technology is the norm for UPS batteries because of its lower cost, lower internal resistance and higher charge/discharge rates.

By comparison, Gel-filled VRLA has a higher internal resistance, which makes it less suitable for high-rate discharging common with UPS applications. It does offer advantages in terms of a wider operating temperature range (-40°C to +55°C) and extended design life. 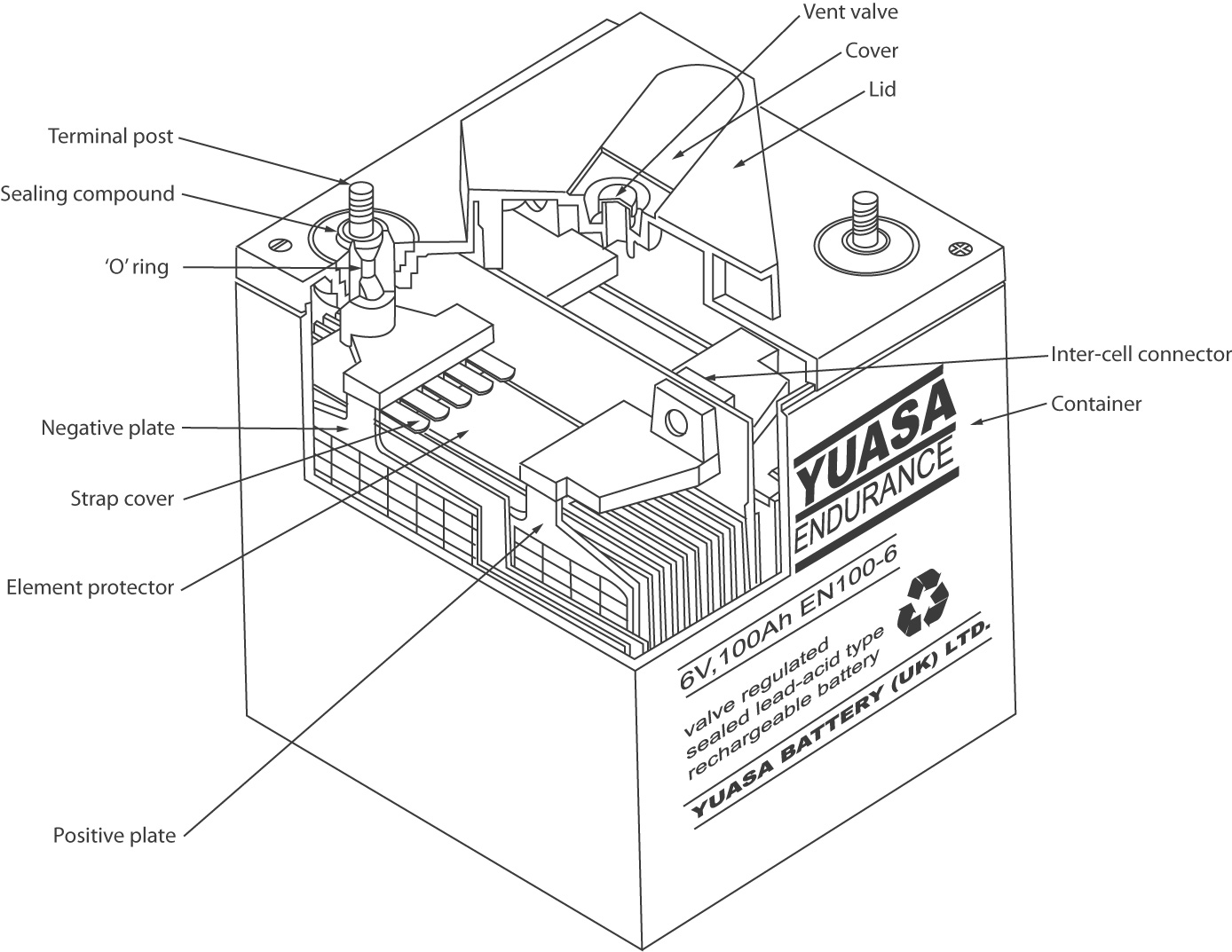 Also known as Flooded, these batteries have plates that are flooded with electrolyte acid. They have a long design life (up to 20 years) and are typically used in large installations needing a high ampere-hour (Ah) rating.

Because they aren’t sealed, any hydrogen generated escapes directly into the environment. This means installations using VLA batteries require more powerful ventilation systems and can pose a greater safety hazard.

To overcome these risks, VLA batteries must be placed in a dedicated room with wash-down facilities in case of acid leaks. Because they are top-vented, they must also be kept upright, with the water levels manually topped up.

They can’t be used in cabinets or racks, which means they aren’t suitable for office environments or data centre installations. VLA batteries are also more expensive than the VRLA alternative.

Nickel-Cadmium (NiCd) batteries used to be a popular option for telecoms installations, while they are still used for UPS applications in locations with very high ambient temperatures, particularly the Middle East.

NiCds offer the advantages of a 20-year design life, the ability to handle a wide ambient temperature range (-20°C to +40°C), a high cycle life and tolerance to deep discharges.

On the other hand, NiCd UPS batteries are far more expensive than the more traditional VRLA variety. And because nickel and cadmium are toxic materials, this makes the disposal and recycling processes at the end of service life prohibitively expensive.

This is particularly true in countries with strict environmental policies and regulations, such as the UK.

Lithium-Ion (Li-Ion) batteries have long been used in electronic devices such as laptops and smartphones, while they are now core elements in the growth of electric vehicles. But recently they are becoming an increasingly viable option for uninterruptible power supplies and other energy storage systems, such as harnessing the power from renewable energy technologies like wind or solar, too.

The advantages of Li-Ion include higher reliability than traditional VRLA/SLA batteries because of built-in battery monitoring and management systems, which check every individual cell for any change in performance.

Another benefit of Lithium-Ion UPS batteries is that they are significantly smaller and lighter because of their significantly higher power density. They also have faster charge times, longer cycles, and at least double the service life compared to VRLA/SLA.

Despite the cost of Li-Ion UPS batteries decreasing over recent years, it is still a far more expensive initial choice than the other options.

However, the longer service life does balance out the higher upfront capital costs. Li-Ion generates less heat and can operate at higher temperatures, meaning they don’t require as much air conditioning, which can reduce cooling costs.

Batteries are essential for UPS correct functioning. In this whitepaper we explain the main important factor that affect their duration and we provide some recommendations for optimizing the UPS + batteries system, in order to maximize its lifespan and general availability.